Chris (クリス, Kurisu?) is considered to be the strongest Masou-Shoujo in Villiers, and also considered to be the Masou-Shoujo that all Masou-Shoujo fear. She becomes involved in a failed coup-d'-etat and was cursed to be stuck in the body of a middle-aged man. Under the identity of Takeshi Kurisu (栗須 猛, Kurisu Takeshi?), she poses as a teacher in Ayumu's classroom. Ayumu later frequently meets her to ask an advice from her, believing that she is a fairy and calling her as Yōsei-san (妖精さん?, lit. "Fairy-San").

She has bright pink curly hair which is tied into three curly tails on her left side with a small steel ball with crimson red ribbons. She has a small nurses hat on the right side of her head connected by a white headband. She has sky blue eyes and a pale heart shaped face which her straight pink fringe slightly covers. She has white nurses clothing. Chris' male form appears to be a middle-aged man who wears glasses.

She used to be Ariel's mentor but was turned into a plain middle-aged man by the Queen's curse because she was purported to be the leader of a coup that Ariel concocted a century before the events of the series. Since then, she has been plotting her revenge against Ariel for letting her take the fall along with some of the others involved in the coup. Due to her strength and her status as a villain, she is known as "the Masou-Shoujo that all Masou-Shoujo fear". Currently she is able to turn back into a Masou-Shoujo from her cursed form of a middle-aged man while she is drunk; thanks to her friend Naegleria's ability to cancel magic. She makes a cameo in episode 12 of the anime adaptation in her original form, indicating that she was under the influence at the time.

Chris was much more violent in the novel. After escaping from the Queen's curse, she sets out to find the strongest opponent in the vicinity, and determines that Saras is her target. She hunts her down and despite Ayumu's interference, she knocks Saras down and while pushing her head to the floor, she drags Sara through the pavement. They were almost defeated but was saved at the last moment by Akuma Danshaku.

Her first appearance in the second season of the anime comes when she is searching for "ethyl alcohol" in the nurses office while recovering. Ayumu spots her and scares her. Ayumu mistook her for a fairy. Chris then makes several other appearances in following episodes, usually in the science lab. During the school festival, when Haruna creates a machine to drain Eu's magic to temporarily regain her magic, Chris utilizes this chance to obtain Haruna's magic absorption machine along with a ring that was taken from Tomonori that keeps her from becoming a weapon. This altogether brings back the resurgence of Chris as she regains her powers.

Chris drunk as she talks to Ayumu. 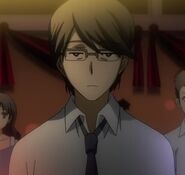 Chris in male form.
Add a photo to this gallery
Retrieved from "https://korehazombiedesuka.fandom.com/wiki/Chris?oldid=7535"
Community content is available under CC-BY-SA unless otherwise noted.