Eucliwood Hellscythe (ユークリウッド・ヘルサイズ, Yūkuriuddo Herusaizu?), more commonly known as Eu (ユー, Yū?), is a necromancer who was first seen in the streets of Tokyo. In an unexpected turn of events, she met a boy named Ayumu and rose him from the dead after being killed by a serial killer. She is currently living with him as his first companion at home. She is the main female protagonist of the series.

Eu has a very distinct appearance; unlike most characters, she takes an appearance of a young human girl from the medieval times. She has straight silver hair that goes well past her waist and blue eyes. She clads herself in silver armor, and wears a purple dress underneath. Eu always wears a piece of armor on her forehead, even when bathing, since it acts as a suppressor for her abilities.

Eucliwood communicates without using facial expressions or spoken words, only "speaking" to others by writing on a note pad, mostly pertaining to her appetite, which is shown to be rather large. This is due to her powers, which activate whenever she speaks whether she wants them to or not. She experiences severe pain whenever her magic is activated, and she claims that even if she were to die her body would continue to produce magic uncontrollably. She hates suffering this pain which is why she generally uses her magic as little as possible. As a result, and to protect her friends from her uncontrollable ability, she developed the habit of writing her feelings to others on a notepad instead of speaking to them. She is shown to care little that she is such a powerful Necromancer, since Kyoko notes that she could easily rule her own realm but instead chooses to live a peaceful life on Earth with Ayumu and her other friends.

At first, she seems to be emotionless and mute (or has a preference not to talk) but is in fact very kindhearted to her friends and other people. At one point, Ayumu even goes so far as to call her the most caring person he's ever met. Eu is also shown to be a very forgiving person, judging by the fact that, even after Seraphim revealed that she had been sent to assassinate her and the King of the Night hurt a ton of people in an attempt to convince her to kill him, both of which were enough to anger Ayumu, she held no grudge against them and still considered them her friends.

Eu seems to have been drawn to Ayumu from the moment she first met him, given that she used her magic to revive him as a zombie, taking on the pain of being stabbed in the process, when she had only known him for a couple of hours at the most. This is noted by Kerberos Wansard, who states that she wouldn't do that kind of thing for just about anyone and that there must be something special about Ayumu. Later, Eu admits that she does indeed love Ayumu. Eu is also notable for never making fun of Ayumu for dressing in a Masou-Shoujo outfit, as opposed to Haruna and Seraphim, who both react with disgust whenever they see him in it.

Despite her stoic, reserved nature, Eu does have a breaking point; she does not like the word "death" being used lightly, which is shown when she slapped Haruna when she told Ayumu to drop dead. This is due to the fact that her powers can easily take away a person's life, and so she knows all too well how painful dying is. She also got extremely angry when she saw how Kyoko had hurt and attempted to kill her friends, going so far as to use her magic to take away all but one of her lives, seemingly uncaring to the immense agony it put her in.

Eu also has cripplingly low self-esteem; due to the incredibly lethal nature of her powers, Eucliwood implies that she killed a lot of friends by accident. As such, she considers herself a monster and was completely convinced Ayumu hated her when she told him about her powers, which is why she had been so reluctant to talk to him about them before. Ayumu, however, states that he could never hate her and that when he looks at her, the only thing he sees is a kindhearted girl who brought him back to life. After the first conflict with the King of the Night, she even goes so far as to leave him and her other friends to avoid causing them any more pain, blaming herself for putting them in danger. After the King of the Night's death, however, she reconciles with Ayumu and promises to never leave him again. She also opens up more to the others, thanks to gaining some control over her powers and being able to talk, albeit only occasionally.

Eucliwood later admits that she is ashamed and even terrified of her abilities, and she wished for someone to be by her side in spite of her frightening ability. It appears that she has found that person in the form of Ayumu himself. He also provides her with comfort when she thinks about her many insecurities and she is shown to take these feelings to heart.

Eucliwood is originally from the Underworld. How long she was in the Underworld is unknown, as is what she did there however it is known she was a part of the Seventh Abyss where she was close friends with Naegleria Nebiros, whom of which crafted Eu's armor and gauntlets to keep her powers suppressed. Eu has actually stayed in Tokyo even before she and Ayumu ever met, although exactly how long is uncertain. When she and Ayumu met, Eu was in front of a convenience store, and Ayumu attempts to make friends with her, only to be rejected at first.

She later rescued Ayumu from an attack from an unnamed serial killer that has been ravaging the town, but with Ayumu's injury too severe for him to survive, she used her ability to resurrect him as a zombie.

Eucliwood and the Aikawa Residence

Roughly a month after the event that took away Ayumu's life, Eu continues to live alongside Ayumu. Her lifestyle in the house would consist of eating what Ayumu would prepare for her, napping and the occasional conversations with him. This boring habit changed when a Masou-Shoujo named Haruna announced her so-called "temporary" stay in Ayumu's house.

Eu also calls forth another person to live inside the Aikawa residence: the vampire ninja Seraphim. She rejects Sera's offer of having her as a servant, but this does not keep Sera from watching over her as Ayumu's third housemate.

They may have not known each other until a month before the current events began to happen, but Ayumu Aikawa and Eucliwood have a nearly unbreakable bond. They are on extremely good terms and are fully content with each other.

Ayumu has possessed a strong crush on Eu since their initial meeting. He has an inexplicable little sister complex as he constantly fantasizes about her speaking to him in adoring tones and suggestive positions. He takes care of Eu as an extremely good friend (classified as a servant) and frequently shows concern for her well being and emotions.

Eucliwood generally keeps her emotions suppressed to keep the people she cares for safe. But after the incident with the King of the Night, she has spoken more than once and expressed her emotions occasionally. During the anime, the best example of this is when she fought against the demon of laziness inside Ayumu and she quoted "You are not the Ayumu that I love" or in the English version "You are not the Ayumu that I fell in love with." This obviously hints at stronger feelings for Aikawa that Eu would have obviously repressed until his amnesia and possession came up.

Overall, she views Ayumu as a good friend, a loyal comrade and a friendly servant. It also appears that she shares Ayumu's repressed feelings due to the fact that she has allowed him to keep fantasizing about her and wished for him continue.

In the end of Volume 19, she and Ayumu have possibly married and living together with other girls.

Eucliwood's relationship with Haruna is a somewhat odd one as Eu is seen as Haruna's big sister but Haruna often rejects this idea and tries to act as if she is the older sister. When Ayumu and Haruna got into an argument, Haruna told him to drop dead and that he was gonna die. Eu went as far as to slap Haruna across her face, only because she took death seriously. Despite this odd relationship the two get on and care about each other.

King of the Night

A deceased young man who was brought back to life as a zombie by Eucliwood. He and Eucliwood formed a very strong relationship, while he gained power and rank as a notorious figure in the Underworld. At a certain point, he became filled with malice and ambition, and went as far as killing a Seventh Abyss, one of many high-ranking individuals that were associated with the upper echelons of Underworld society. Eucliwood, horrified and saddened by what he had done, rejects him and attempts to destroy him.

So far Eucliwood only has two known weaknesses

Eu as a little sister in Ayumu's delusion.

Haruna, Eucliwood, and Seraphim after bathing.

Eu in a happy face as seen in the ending of season 2.

Eu and the King of the Night.

Eu and her Teddies

Eu after the wish of Ayumu 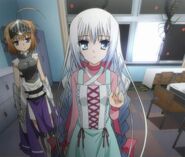 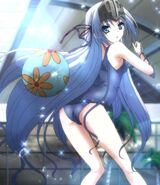 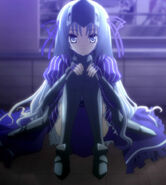 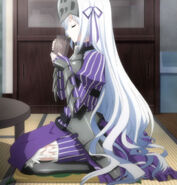 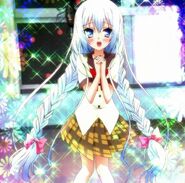 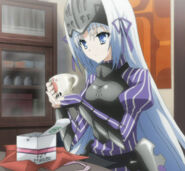 Add a photo to this gallery
Retrieved from "https://korehazombiedesuka.fandom.com/wiki/Eucliwood_Hellscythe?oldid=7486"
Community content is available under CC-BY-SA unless otherwise noted.