Sarasvati (サラスバティ, Sarasubati?), or "Saras" (サラス, Sarasu?) for short, is a vampire ninja and is Seraphim's superior. She had put a contract out on Eucliwood for being a Megalo magnet and has Sera do the job, although this has been revoked later on. She has been living in the human world for some time and has adopted the pseudonym Kirara Hoshikawa (星川 輝羅々, Hoshikawa Kirara?). She is also an idol under the stage name Lovely Kirara, and the head maid of a cafe that managed alongside her comrades.

Sarasvati is an attractive girl with long black hair and piercing crimson eyes. She's usually seen in a simple school uniform throughout the series, and occasionally wears a cool expression with a slight frown on her lips. Although not as endowed as Sera or Yuki, Saras still holds a considerably attractive body in comparison to some of her other peers at school like Taeko. Her casual clothes consists of a long-sleeveless cardigan over a white, stylishly frilled tank top with a black ribbon decorating the chest region, and a simple red skirt and boots. Aside from these clothes, Saras doesn't appear to wear any additional accessories.

As her idol-persona, Kirara Hoshikawa, she wears a Gothic-style black outfit that consists of a white sleeveless polo shirt covered by a black corset with frills; a belt hanging around her waist, black boots, vampire wings on her back and finally a dark overcoat that she wears loosely around herself, displaying her shoulders to emphasize her persona's style.

Sarasvati is a very serious individual who exudes a great deal of authority and iron will. She shows a level of impatience and aggression when it comes to her goals as shown in her attempts to get closer to Ayumu and the way she handles her subordinates like Yuki who she wanted to dance in her concert. Despite being a firm enforcer and follower of her village's traditions, Saras is rather open minded in that she willingly embraces change to the status quo of the vampire ninjas by becoming an idol. Saras is also rather sadistic in some levels, showing a verbally aggressive side to her when she assumes her idol-persona, Kirara Hoshikawa, as she addresses her many fans during her concerts.

Her seemingly cold appearance aside, Saras possess a measure of kindness and understanding in her, and only does what she needs to do with good reasons. This quality of her's is displayed when she assists/defends Sera, Haruna and Ayumu from King of the Night during Eucliwood's disappearance. Her kindness further extends to her subordinates such as Yuki, who she allowed to go to the mixer party that Ayumu was setting up for Kyoko.

Later, she falls in love with Ayumu (to be more precise love at first sight when she sees his butt and curve line). She gradually shows a much softer side to her personality towards Ayumu as the series progresses, affectionately addressing him as "My Darling", and even openly claim her interest in him. One such example was when she confessed to Ayumu that her love for him will last forever and continues to ensure him that she will treat him right if no one else will. It should be noted that this was addressed so aggressively that it came off as some sort of sadistic ultimatum to Ayumu, leaving him fearfully uncertain as to how he should interpret her confession. Regardless, however, Saras is shown to get along well with Ayumu despite their initial interactions and so are in good terms with each other by the end of season 2.

She puts a contract out on Eucliwood for being a Megalo magnet and has Sera do the job. She isn't too happy to see that Sera had abandoned the mission, though while she considers Sera a traitor for abandoning the mission and puts a hit on her for the effort, Saras saves her and Haruna from King of the Night later on.

She later revokes the hit on Eu (and, by extension, the hit on Sera) following the success of her and Maelstrom's factions combined in sealing the gates of the Underworld (though Sera was ultimately the key, since she had Eu's blood flowing through her veins following a fatal injury incurred by King of the Night).

She becomes a major character in the second season, as well as later events in the light novel, appearing more frequently in season 2 of the anime. Saras appears in a cafe she owns, where Ayumu and Orito take the "tsundere challenge" to conquer the girls there. When Ayumu defeats Sera and Eucliwood, he challenges Saras while believes that she is the last opponent. However, Saras remarks that she doesn't participate in the game and calls Kanami Mihara instead. Later, she invites Ayumu to her concert, and tells him to make a promise that he must come. Ayumu arrives late, due to his business with Naegleria Nebiros. Ayumu apologizes while Saras replies that it doesn't need. Saras says that she's glad since Ayumu was able to fulfil his promise. Saras later indirectly kisses him.

The object of her affection (fetish). They first met at school where Saras gave Ayumu the "Ero-Glasses". It was simply a strict, business affair with her leaving without further interactions. Although later on, during a tournament held by the school, Saras' shows an interest in Ayumu after he inadvertently displayed his hips to her.

From there on Saras' has become somewhat of a stalker, showing up on random occasions and even taken an active role in getting close to him. After her confession and declaration to Ayumu, they become more friendly with each other, going so far as to invite him to her concerts and hangout whenever she could. She seems to have no qualms with openly displaying her affections for Ayumu and stealing an indirect kiss. It is implied that she does not mind other girls being in love with Ayumu.

A fellow vampire ninja and subordinate. Their relationship is that of a senpai and kōhai. She usually orders and gives advice to Sera, and at times can be seen doing favors for her like delivering the 'ero-glasses', a basket of suspicious mushrooms, and a beef recipe to Ayumu. From a certain perspective, it can be concluded that Seraphim's behavior partially came from Saras's own character. Sera personally refuses Saras for being an idol, since it's in contrast to their custom as ninjas.

Another vampire ninja and subordinate. They are on good terms with each other and can be seen hanging out together. 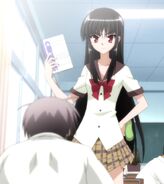 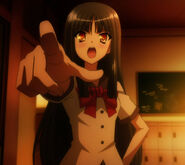 Saras confesses her love to Ayumu. 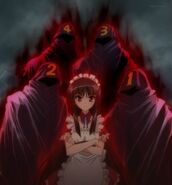 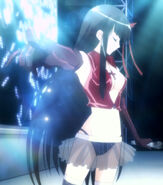 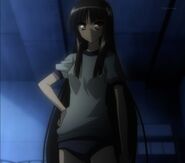 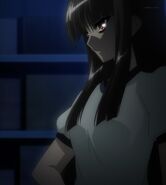 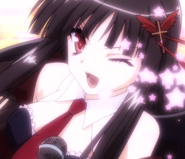 The vampire ninjas led by Saras.

Saras spreads photos of Ayumu's butt all over the internet. 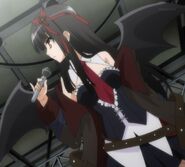 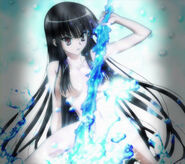 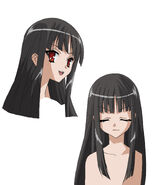 Add a photo to this gallery
Retrieved from "https://korehazombiedesuka.fandom.com/wiki/Sarasvati?oldid=7492"
Community content is available under CC-BY-SA unless otherwise noted.